Come, gather round, my miserable Mizzou brothers and sisters. We have to have a little chat.

The last time we got together I wrote of the opportunistic schedule that lay before the 2019 Missouri Tigers. I typed ad nauseam about the potential strengths that this version of the Tigers had to offer – particularly on offense. And while I never gave out a projected win total (I’m a coward, I know), the implication was there: 2019 could have been a big year to move the football program forward, postseason ban be damned.

This is why we need to have this chat, friends.

Now, it would be easy for me to tell you right here from my couch how big of a disaster the 2019 season was, or how in hindsight this group just continued to underachieve without sharing my thoughts week-by-week. (Which by the way, I really regret that I was not able to do.) We do need to chat about how things shook out in 2019 and why, but more importantly, we need to chat about what happens for this program next.

First thing’s first, let’s pour one out for BO

As it’s been nearly a full week now this won’t be news to anyone: The Barry Odom era at Missouri has ended. Chalk it up for a 25-25 overall record, 0-2 in bowl games and 13-19 in Southeastern Conference games. Talk about average-at-best.

A man losing his job should never be celebrated. I am not glad that Jim Sterk had to pull the plug on Barry Odom, but I have no hesitation saying it was the right move. Odom inherited the program at a time when the Missouri football program was viewed as toxic. Nobody wanted this job. On top of it all, in the wake of the 2015 protests, Mack Rhoades, the man who hired Odom, immediately bails for Baylor. I do not envy the position that Odom was put in. There is no doubt that he put his heart and soul into this program, but the performances on the field were indefensible.

The biggest factor in Odom’s downfall, in my opinion, was how he managed to lose any and all momentum the second he gained it.

When it came down to it, Odom feasted on inferior competition, and proved that he couldn’t get his guys prepared to win games when it mattered most. His in-game management was questionable. His players seemed to perform worse when given extra time to prepare. And losing to the likes of Middle Tennessee State, Purdue (in a blowout), Wyoming, Vanderbilt and Kentucky (four years in a row!!) is never going to help your case. It was time to move on.

One final thought – for those that would point out that Odom would have been bowl eligible for a third straight year, and that firing coaches that go to bowls at Missouri is not acceptable, I would ask you to consider this: In 1974 (this was the year my dad was a freshman at MU) Mizzou’s non-conference schedule included Ole Miss, Arizona State (who was No. 7 in the country that year according to Wikipedia) and Wisconsin. They also had to play Nebraska (No. 5 in the country) and Oklahoma (No. 2). In 1975 it included Alabama (No. 2), Illinois, Wisconsin and Michigan (No. 12). Missouri would also go on to play No. 2 Ohio State, No. 4 USC and No. 5 Notre Dame on their non-conference schedule later that decade.

In 2017 Missouri faced football juggernauts such as Idaho, UConn, Mo State and Purdue (ugh…). In 2018 it included the powerhouse that is UT-Martin and in 2019 they faced some ferocious bunches from SEMO and Troy……and, yes, Wyoming. We know how that turned out.

Now, my point here is that the college football schedules across the board are much, much easier than they once were. I know everyone else does it. I’m not complaining. I’m just pointing out that on your 12-game schedule, you’re given, let’s call it what it is, basically 4 automatic wins, and oh by the way, your cross-division SEC rival is Arkansas, who is a historically bad football team by SEC standards in recent years. That means assuming you win those 5 games, one win out of your remaining 7 games adds up to a successful season? I think Missouri could and should set the bar higher than that. 6-6 does not make you invincible. It makes you average. 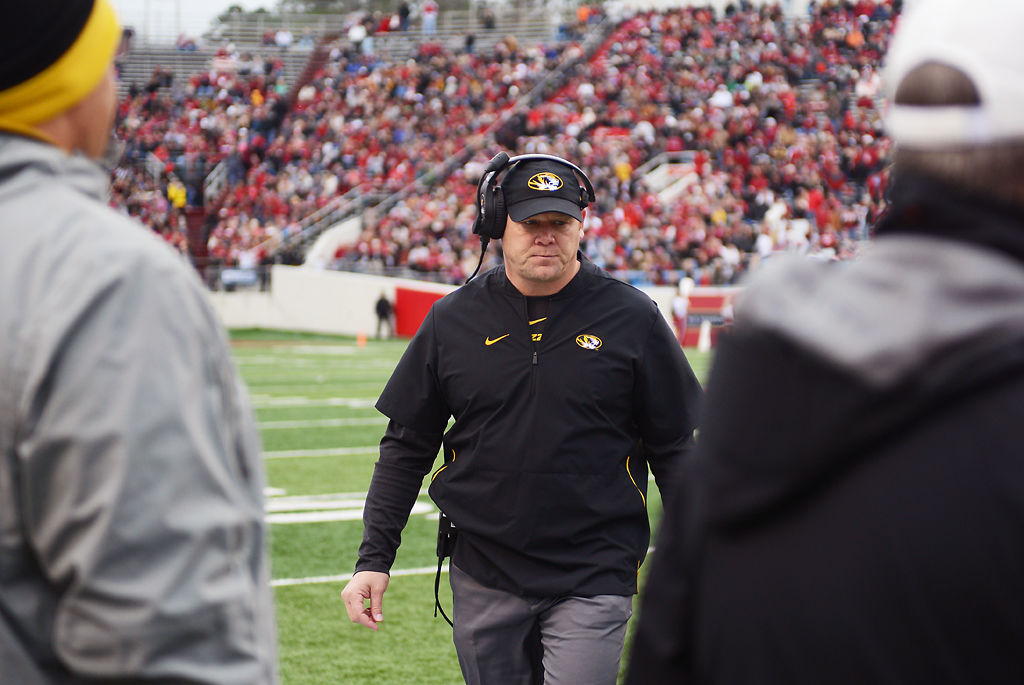 Now, it’s time to look ahead

Now that I’ve spent more time on Barry Odom’s firing than I would have liked, it’s time to talk about what’s ahead for Missouri as a program. As a disclaimer, I am not going to give my hot list of names that Mizzou should go hire. I will leave the real journalists to that. But I feel compelled to say this: This next head coaching hire will set the tone for Mizzou Athletics for the next decade, and I’m only being a little dramatic here. I have a great deal of confidence in Jim Sterk. For better or for worse, Barry was not Sterk’s guy, and you just got the sense that Sterk was waiting around for an excuse to get his own guy.

Now is Jim Sterk’s chance to get “his guy”. And it needs to work out.

I have been of the opinion that despite Odom’s lackluster performances, now would not have been the perfect time to make a coaching change. In addition to the bowl ban handed down by the NCAA for the tutor scandal everyone is all-too-familiar with, Mizzou has been punished with restrictions on recruiting class sizes and official visits, fines and a reduction in scholarships. That hurts. A lot. It certainly is not a positive when you are already a rebuilding program in the SEC trying to attract a new bench boss. What coach will want to take this challenge on with all of that added weight thrown in the mix?

Sterk’s decision would leave me to believe that he has a guy, or guys, that he likes and thinks can turn the program around to where it once was not so long ago. (Remember when we were a half away from the BCS National Championship game in 2013?) Now, of course AD Sterk will seek a guy that can win football games. That is paramount for the next head coach. But also, Sterk will seek a charismatic figure who can legitimately be the face of this football program. Someone who will capture the imagination of the casual Missouri fan and help guide recruits to Columbia, Missouri. I feel confident in saying that Jim Sterk knows that success means selling tickets perhaps as much as winning football games. This is a fact he won’t soon forget, and it will come into play with his hire expected to come sometime next week.

These are precarious times to be a Missouri Tigers fan. At risk of sounding doom and gloom, the decision of who will be the next head coach of the Missouri Football Tigers has the potential to do a lot more bad than good. But, nonetheless, we have seen the heights that this program can reach. Is this program ready to compete for the SEC? I don’t know. It does not look that way for 2020. But we can see how quickly things can change when all of the right pieces are in place. Now here’s to hoping that Jim Sterk can find his man…

“When things happen throughout your life, you never lose hope. You battle and pull together, You never know when greatness is around the corner.” – Gary Pinkel

View all posts by themaushaus93